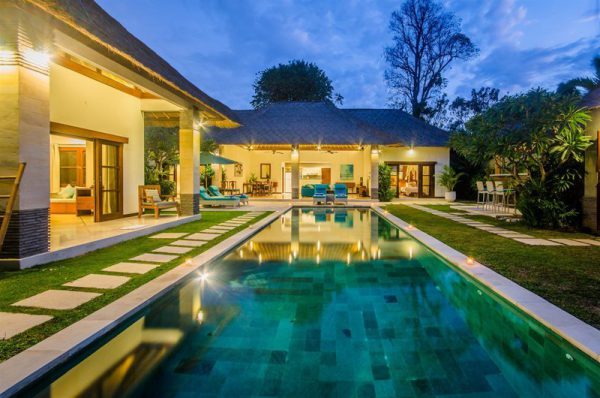 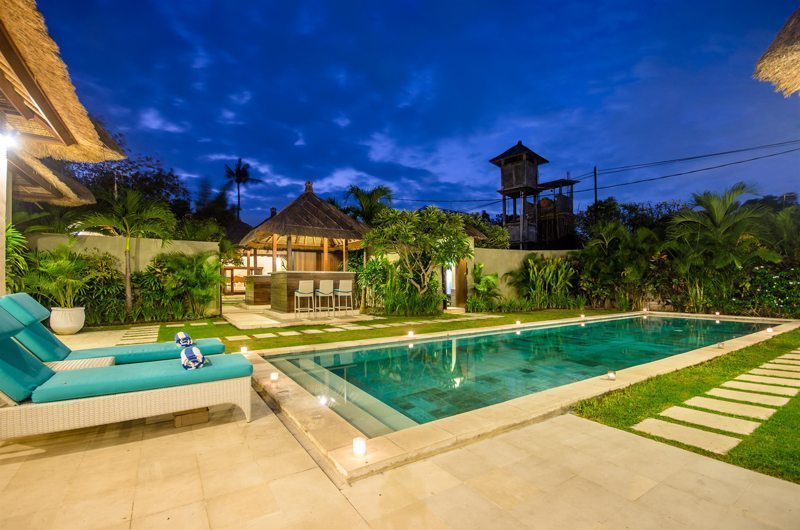 Accomplished in the predominantly cream colour, the open-sided living and dining areas of both villas are tastefully adorned with flamboyant furnishing: blue or green L-shaped sofas facing the wall-mounted satellite TV, the matching colour dining chairs sitting around the wooden table and contemporary paintings hanging from the walls. Right behind the living area, there is a modern kitchen fitted with the cutting-edge appliances.

Villa’s generous outdoors features an inviting garden bar with high stools, where the breakfast can be served and luxurious pool-front bale equipped with an upholstered king-size bed.

Master Bedroom
The master bedroom occupies the entire stand-alone pavilion opening onto the serene tropical garden. The queen-size bed placed in front of the large screen satellite TV is draped in a mosquito netting. The suite has a large dressing area and an ensuite bathroom with egg-shaped stone bathtub, open-air tropical shower and basin sink.

Guest Bedrooms
Two of the guest bedrooms sit on the either side of the main living pavilion. Equipped with sliding doors, each bedroom provides the direct access to the garden. One of the bedrooms comes with a queen-size bed, while the other has twin beds, draped with white mosquito nets. Both guest bedrooms have air-conditioning, satellite television, large wardrobes and ensuite bathrooms.

Villa Alore is in the centre of Seminyak. Just around the corner, there is a large Bintang supermarket, and plenty of shops and street-stalls to hunt out some unique souvenir from Bali. The splendid Double Six beach is 10 minutes away from the villa, while the infamous Eat Street can be reached within a 15-minute walk.